A Beginner’s Guide to Augmented Reality vs Virtual Reality

Home » A Beginner’s Guide to Augmented Reality vs Virtual Reality 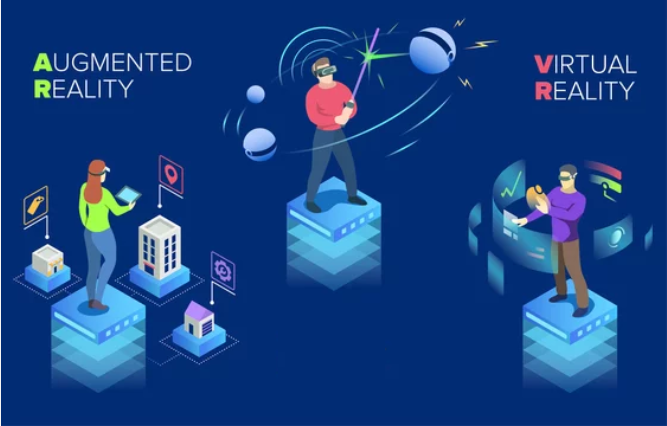 The power of technology is diverse, including the types of services and solutions developers make out of it. Two unique technologies currently growing in popularity are Augmented Reality (AR) and Virtual Reality (VR).

Both AR/VR applications are helpful in different sectors, like electronics and IT, gaming, automobile, hospitality, and leisure. Besides these, the uses of AR and VR are visible in other avenues, like entertainment, brand development, marketing, and gaming.

Companies today are turning towards AR and VR technologies due to the high growth and profit potential. Statistically, 90% of companies with $100 million – $1 billion valuations use these technologies.

Although most consider AR/VR app development in the same league, both have different uses and specifications. Therefore, before choosing one over the other, you should understand what each version offers.

VR: VR is mainly a computer-centric simulation of a different reality or world. Typically, it is utilized in 3D video games and movies and is a technology that mimics real-world objects and behavior with sensors and computers. Users essentially “immerse” into an alternate reality and carry out their movements in real-time, with real-world actions. It is commonly used in entertainment, games, education, science, and training.

●     Users get a headset that comes with a screen in the two eye areas. Both the right and left eye displays showcase different images that influence the brain to see picture depth.

●     Integrated motion sensors in the headset’s virtual reality software allow users to change background views as they turn their heads.

●     Hand controls with motion sensors are available that allow players to hold, grab, or throw virtual objects within the VR environment.

●     Tethered sets connect the power source and PC with the device, and they can link with sensors mounted on the wall to track users’ movements and mimic them in the game.

●   The screen and computer are integrated with computer vision for surface and object identification.

●   Motion and depth sensors allow the device to trace the game room and sense the movements of users.

● The AR application overlays the mapped sequence and motions with imagery for a first-person gaming perspective.

VR: Here, the system controls all of the visual senses during the operation.  Thus, you would get a fully immersed experience.

AR: Users know that they are in the real world; their visual sensors are not seeing the digital world. So, you would get a partial immersion into the action.

VR: Users often feel motion sickness while using VR; however, this applies mainly to older headset models. Ones that refresh images fast do not give motion sickness, like Oculus Rift and HTC Vive, which run at 90 frames per second.

AR: Motion sickness does not occur with AR technology usage; there is no distortion in the perceived motion vs. real visual.

VR: Phone-centric VR sets are not mobile in most cases; users have to turn their heads only. On the other hand, tethered VR systems allow mobility in more prominent areas but are not costlier.

AR: Since AR is mainly used on mobile phones directly, you would experience a more mobile experience. You can use this technology even while commuting. However, there are no headsets in AR examples which can make the experience less smooth.

VR: While using VR, you need to have multiple devices installed and activated to operate the VR environment.

AR: Users only require iPad and mobile phones to utilize the AR software.

VR: Whatever happens in the VR environment does not affect one in real life. Every scene that they notice is virtual imitations, i.e., fight sequences in action games.

AR: Since people are conscious and experience everything in the real world, they notice more real-time influences. This overall enhances the user experience of AR technology.

AR: Circumstances in which AR is used often, and would continue to develop, are wearable computing, interior design, and hands-on skill-based training.

Overall, Augmented Reality and Virtual Reality are not similar. However, they do run on a similar theme of combining virtual elements with real-world elements using technology.

VR is more immersive but can cost higher if you want to use the more extensive advanced sets. On the other hand, AR is user-friendly but does not give a fully immersed feel. Choosing one over the other depends on the preferences of users ultimately. So, consider this first.

Get Enterprise Mobile App Development And Expand Your Reach!

As your customers' needs grow, we deliver enterprise #mobility solutions. Our company has provided enterprise mobile #appdevelopment services to our esteemed clients for over many years.
https://lnkd.in/fQqutkj

Get Best-In-Class Web With us!

Make your projects a success with a professional Python development company. Etelligens offers #Python web and application #development services of the highest quality. We can help you turn your ideas into reality with our #pythondevelopers.

Experience the convenience & comfort of turning your dream business app into a reality with us - Trusted #reactnative app development Company.

Hire a team of talented #ios & #android app developers that work as a unit & help you to accomplish your goals.
https://lnkd.in/fXCyrzR

Get ahead of the competition with our fast, secure, & real-time #nodejsdevelopment services. Our #nodejsdevelopers have a deep understanding of the #nodejs runtime environment.
https://lnkd.in/fA6mj3W

Partner With Us To Create Highly Scalable Apps Using Flutter!

The idea of a #digitalproduct should never be limited to mobile phones. You can build platform-independent #digital experiences with the help of our flutter developers.
https://lnkd.in/eX2HTRU